Renaissance Wax has exceptional clarity and placisity, and being free from acids, is neutral, so that it may be used safely on wood, leather, metals, stone, glass, plastics and paper.
Originally formulated in the British Museum research laboratories in the early 1950's in response to discussions amongst tecnitians at an international conference on fine are conservation.
Unlike traditional beeswax and carnauba which can spoil original finishes over time, Michrocrystaline waxes such as Renaissance wax do not cause future conservation problems and can be used in a broad range of applications. 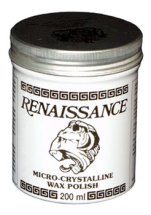